An Appalachian history blog wouldn’t be complete without a Twelfth Night explanation, so here it is! Merry Old Christmas! 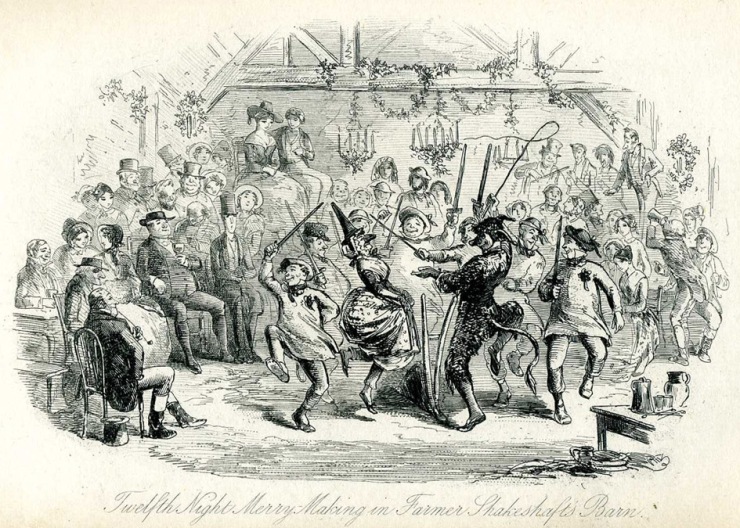 Anyone who knows anyone from Appalachia is certainly well aware of the stereotype surrounding his/her apparent stubbornness. As a native Appalachian of a dozen generations, I can personally attest to the truth of this behavioral trait. Generally speaking, we are a truly difficult group of people (of course, there are exceptions to every rule) who can be frustratingly obstinate in the face of opposition. But, we aren’t stubborn simply for the sake of being stubborn and showing the world how stubborn we can be. Our stubbornness usually rears its ugly head when our values and beliefs are challenged, whether on a personal level or on a larger scale. One of the most glaring examples of our stubborn nature can be found in the long-lived observance of Twelfth Night, or Old Christmas.[1]

Interestingly enough, this story of Appalachian stubbornness stretches back into the Roman Era. In the year 46BC Julius Caesar adopted a new calendar system to be used in his Roman Empire. Instead of relying on the ancient lunar system which was complicated and created years of varying lengths, Caesar’s new solar calendar contained 365 days, began annually on January 1, and changed the number of months in the year to twelve. Astronomers chose to add an extra day at the end of February every four years to accommodate for the few extra minutes in the Earth’s daily rotation around the Sun. Thus, the Julian calendar came into being and slowly spread throughout the Western world during the next sixteen centuries.

The original Julian calendar was not without problems, however. The use of Leap Year was not precise, nor accounted for properly. As it was originally calculated, the Julian year spanned 365 days and six hours – a few minutes longer than the actual rotation of the Earth. These extra minutes began accumulating and adding extra time on an annual basis. These accumulated minutes then turned into extra days within the year, adding an extra three days every four centuries. The Julian calendar’s seemingly miniscule error caused such a disturbance in dating that Easter began shifting away from the Spring Equinox.

By the late-sixteenth-century, Easter was so behind the Spring Equinox that astronomer’s determined that ten days would need to be removed from the calendar to realign the holiday. This prompted the Roman Catholic Church to adopt a new calendar system under the supervision of Pope Gregory XIII in 1582. The new Gregorian calendar, as it became known, calculated days more precisely and rendered Leap Day more beneficial. To deal with the extra ten days in the calendar system, the Gregorian astronomers simply decided to remove the days from the Catholic calendar – October 5-14 simply did not exist in 1582.

So what does all of this calendar modification have to do with how our Appalachian ancestors celebrated Christmas?

The Gregorian calendar burst onto the scene during a very tumultuous time in Europe’s history. By 1582, Martin Luther had nailed his 95 Theses to the church door, Scandinavia was thoroughly Lutheran, and Henry VIII already broke with the Catholic Church and created his own. The Protestant Reformation was in full swing. Thus, when the Catholic Church announced its new dating system, those countries still practicing Catholicism followed suit while the newly Protestant nations kept with the old Julian system.

In the 170 years after the introduction of the Gregorian calendar, fiercely Protestant settlers flooded into the British North American colonies from their European homelands. These settlers brought their pre-Christian dating system with them and continued to celebrate the birth of Christ twelve days later than the rest of the Christian world. All of that would change when the British government enacted the British Calendar Act of 1751, which officially required all corners of the British Empire to adopt the Gregorian calendar. Interestingly enough, the Gregorian calendar also failed to maintain a set number of days in a year, so by 1751 the British Empire found itself with extra days in the year. The British government followed the idea of the earlier Roman astronomers and removed twelve days from the month of September. And it was this modification which shifted the date of Christmas in the British world from January 6 to December 25. Now do you think our rowdy Appalachian ancestors politely accepted the Gregorian calendar in their lives simply because some high and mighty man on a throne told them to? Of course not.

Expecting these anti-Catholic and Patriotic backcountry people to obey both the British government and the Roman Catholic Church was ludicrous. Even though the days of Christmas on the Julian calendar did not align with the winter solstice anymore, Protestants had celebrated Christmas in January under the Julian calendar for so long that many considered this change as blasphemy and Papal propaganda. So in true Appalachian fashion, many in the backcountry simply refused to observe Christmas on December 25 and continued to celebrate Twelfth Night on January 5. But, alas, old habits die hard, especially those that are held in high esteem within a social group. Twelfth Night lived on in Appalachia for another century or so, but it did eventually give way to our modern-day December Christmas.[2]

[1] Christmas during the era of the Julian calendar was fundamentally different from how we observe it today. During the Middle Ages, Christmas spanned twelve days. It began on December 25th with the birth of Jesus and it ended on January 6, known as the Epiphany, when the three Magi arrived in Bethlehem to pay homage to their savior. The Feast of Epiphany became one of the most important dates in the Christian year. These twelve days were full of family feasting and community revelry.

[2] The Amish are also known to celebrate Old Christmas in the modern era.